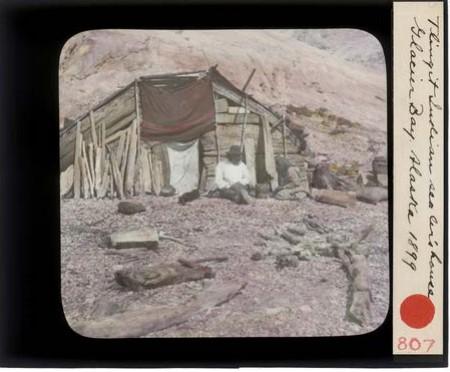 This camp represents the Huna people’s return to their homeland after being pushed  out by the Little Ice Age’s glacial maximum which occurred around 1750. The beginning of the Little Ice Age occurred about 4,000 years ago. Prior to 1680 there was no Glacier Bay and was called S’e Shuyee, but in its place was a broad valley with Huna Tlingit villages found along two of the major rivers that divided the valley. Far to the north was the ice cap that would eventually feed the advancing glaciers that would identify the beginning of the Little Ice Age.

It is a testament to the adaptability and resilience of the Huna people that has allowed them to survive here in this harsh environment for millennia.

Tlingit were semi-nomadic hunters and gatherers. This hunting camp marks the return of the Huna people to their homeland after having to retreat from the advancing glaciers. These camps were quick to set up and take down offering quick mobility should the hunting conditions change. Not only did the camps provide shelter but the camps allowed food preparation and preservation activities to take place.

Huna people were famous for their sea mammal hunting skills, and seals provided meat as well as oil, a highly nutritious food that provided them with the calories needed to live in this harsh environment.

Huna hunters not only hunted hair seal but also fur seal and sea otters. The newly formed ice sheets from the calving glaciers formed an excellent environment for hair seal to give birth their pups and Huna hunters took advantage of this annual gathering of hair seal. Though seal could be taken throughout the year, pupping time was a time of great abundance for sealers.

As for fur seal and sea otters, other areas and strategies were used to successfully hunt these species.