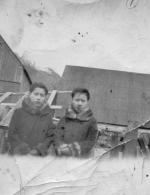 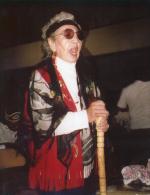 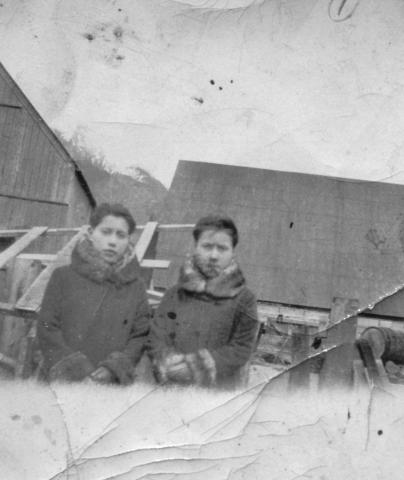 Amy Marvin was Chookan sha of the Eagle moiety.  She was a lifetime member of the Alaska Native Sisterhood Camp 12 of Hoonah and was one of the past presidents of ANS Camp 12. She was one of the founders of the Mt. Fairweather dance group and was one of its lead singers and drummers. She went as far as Nome and Washington, D.C., representing the Tlingit people of Hoonah.

She was a member of the Russian Orthodox Church and was a choir member.  She also enjoyed cooking her Native food, sewing, crocheting and teaching others about her traditional song and culture.

Amy Marvin was born on May 16, 1912 at the place on Icy Strait called “Ducks’ Point” in Tlingit.  Her given name in Tlingit is Kooten.  She was born into the Eagle Moiety and Chokaneidi clan.  Her mother was living on their traditionally owned land in the Ducks’ Point area, and her father was helping build the first company owned building at the Icy Straits Salmon Cannery when she was born.

Her mother’s name was Sxeinda.at.  Her father’s name was Shx’eik’—Pete Fawcett in English.  He was of the Yeilkudei Hit (Raven Next House) of the T’akdeintaan clan of Hoonah, making Amy T’akdeintaan yadi.  Amy’s mother married twice.  Her first husband was Ganeil, and her second husband Shx’eik’.  Amy is the youngest of 14 children of the two marriages.

Amy is of the Naanaa Hit, the Upper Inlet House, one of the houses in Hoonah named for the house in the Glacier Bay History.  Amy Marvin is a direct descendant of Kaasteen and Shaawatseek’.

Amy grew up in Hoonah and spent most of her life in the village.  She remembers the old Hoonah where she was raised, and when some of the churches and missionaries began to undermine the traditional culture by teaching that the old Tlingit beliefs were not good.

As a traditionally raised Tlingit, Amy Marvin shares the feeling of most of her generation that the land is the true spiritual and economic base of the Tlingit people, not cash and profit.  As her recounting of the Glacier Bay History illustrates, the land is the spiritual history of the people, and the history is the land.  It both angers and saddens Amy to witness the continuing loss of lands, and the unwillingness of the various agencies, institutions, and corporations to help prevent the loss.

For example, Amy talked about their clan owned land at one of the cannery sites.  She said a superintendent once asked if he could move the graves of her family’s relatives so that the cannery could build houses on the land.  They promised to make it nice, so the family would feel good about it.  “’No!’ said my father.  ‘We’ve already lost too much there.  I don’t want you to move them.’”

Amy explains how another superintendent recently put his survey markers on Amy’s mother’s land.  She asks, “Why did he do that?  The land is not his.  It’s not his business.  He hasn’t bought it.  If only someone could help us prove the land is ours and not his.”

Another example is the lake behind one of the canneries.  The story of this lake records the history of how a Chookaneidi shaman named Shaxoo caught a halibut for his curious father.  Amy comments, “It would be good if the Corporation would help us reclaim it again.”  Such experiences are not unique to Amy Marvin and her people, but are common throughout Southeast Alaska.  As shown in the Glacier Bay History, he land is important not only because the ancestors of the people used it, but because they shed their blood on it and for it.

Amy has been active all her life.  She began cannery work in Port Althorp in 1924, when she was 12 years old.  She was so young she didn’t even know how much they paid her.  She later worked at P.A.F. Cannery, up the bay from Excursion Inlet, and after that at the filler machine, and later at the patch table.  Amy is presently a senior companion to the senior citizens who are shut in.  She went to school in Juneau to train for the job, and visits her clients daily after lunching at the Hoonah Senior Citizens’ Center.

Amy is active in the Orthodox Church and remembers when the Tlingit translations of Orthodox prayers were being taught to the choir at St. Nicholas Church in Hoonah.  She said the songs were introduced by a man named Yeika, David Davis of Sitka.  Amy is still part of this choir, singing alto, and travelled to Sitka with other members of the Hoonah choir in 1980 to join with the combined Orthodox choirs of Southeast Alaska in recording liturgical music in Tlingit.

Amy is one of the most talented tradition bearers alive today.  She learned to make baskets when she was very young.  While her mother was working in the cannery, Amy would get into her mother’s nicest materials, take the best grass, and play at weaving baskets.  She learned to do beadwork at the same time.

Amy is an excellent story teller among her people.  She is the family historian, keeping the history, names, and music alive.  She is also noted as an orator, and has never failed to give a speech in a feast.

She is also a song leader and drummer.  Amy is a lead drummer in the Mt. Fairweather Dancers in Hoonah.  She has been asked to lead in ceremonial dances in Koo.eex (feasts) by different clans of Hoonah.  She knows the songs of her clan, and of those of the other clans of Hoonah and other communities in Southeast Alaska.  When asked how she learned to drum, she answered, “When my father’s feasts took place, I listened for the dignified sections and I lived by them.”

Amy’s eldest brother died early.  Her brother John Fawcett was the second oldest in her family.  John was her half-brother; after his father died of a gunshot wound, his maternal grandmother raised him.  He was the leader of the Hoonah Alaska Native Brotherhood band.  Amy’s younger sister Mary is remembered as having a lyric soprano voice and for her singing in the Hoonah Orthodox Church.

Amy was married twice, first to Sam Knudson, then to Harry Marvin.  She has six children—five boys and one girl.  When asked how many grandchildren she had, she slapped her hands together and laughed, “Too many!  And some are still in the making!”