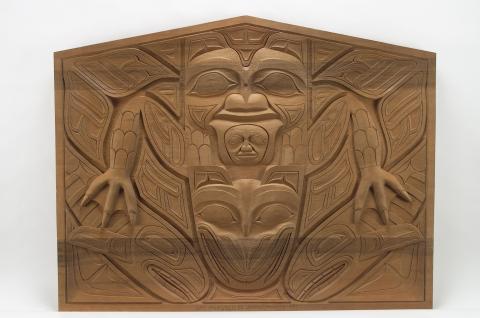 Access image
Image Metadata
Summary:
This panel was relief carved by David Williams Sr. from red cedar in 1972. David was a member of the Chookaneidí clan, from Hoonah and his Tlingit name was Kaash de yaaw dakaa.
Description:

This depiction of Gunakadeit was exquisitely carved by David Williams Sr., a Chookaneidí carver from Hoonah. David’s mastery of design, along with the mastery of adze and crooked knife are apparent in this piece. David’s work is famous throughout the area, but his fame eventually reached far and wide resulting in his work being located in the Vatican’s private collection and in the private collection of the Queen of England. Not to leave out the fact that he had personal audiences with both.

David is a master artist from the transitional period and was self-taught. He comes from a long lineage of masterful artists.

The sea monster Gunakadeit had an important place amongst all of the Northwest Coast people and was seen as an important benevolent protector and provider for humans.

Tlingits believed in honor and respect which they showed to this creature called Gunakadeit. In return the monster provided bountiful harvesting and helped people return safely home in their canoes.  The values of honor and respect were reciprocated by both monster and humans through the ages. Parents, grandparents, aunts and uncles taught these concepts from the time of early childhood through adulthood.

Panel of red cedar wood titled "Sea Monster," carved in high relief depicting a Northwest Coast style two headed figure with a human face in the center with fish swimming under the hands of the figure on either side of him. Signed by the artist David Williams, Sr., 1972.

Commissioned by Indian Arts and Crafts Board representatives from the artist in 1970; delivered to IACB in 1972; part of the IACB Headquarters collection (Department of the Interior, Washington, DC) until 2000 when it was transferred to NMAI.